Canada is a very rich country by international standards. Should not we, who live the life-style envied by so many impoverished persons, be aware of all the reasons we hold this envied position?
You may not know that Canada provides the location for seventy-five percent of the world’s mining companies. Then, you may wonder the reasons for this. I would like to suggest several of these reasons:
1. The Canadian nation is itself, a very rich source of minerals. Hence, it is an attractive country for mining investment.
2. The Canadian government has encouraged the development of a great deal of mining expertise and mining technology through mining concessions and reduced taxation
3. Canadian mining companies, like those mining companies of most other developed countries, have inadequately enforced regulations governing their behaviour while they operate within Canada or abroad.
Perhaps this last point is the one most salient here. By imposing very little regulation on the mining industry, and investing heavily in it, Canada has been able to generate great wealth for our country.
At this stage, I will introduce point # 4, another important reason for the location of so many mining companies in Canada
4. Canada has amassed a very large number of highly paid corporate lawyers with the expertise to defend mining companies from litigations related to their activities around the world.

What practices do our mining companies use to access the mineral-rich lands they wish to mine in here or abroad?
Canadian Mining Companies may-
1. buy influence with highly placed officials in the target country. Simply put, they use bribery.
2. promise the target government that their project will bring great social and economic benefits to the country
3. release environmental impact reports downplaying the harmful effects of the mine
4. claim that there are no longer indigenous peoples living in the area they wish to mine
5. divide the resisting indigenous population in the mining area itself, making grand promises to the locals of vast social improvements, distributing gifts in the communities – all to gain support and silence critics,
6. launch a criminalization campaign against the community resistance
7. assault, threaten, rape, kill peaceful resistors using their mine or host government security forces
8. incarcerate resistance activist for months
9. manipulate the consultation process (with complicity of the state) if such consultation is required by state law
10. transfer the mine to a sister mining company if the mining company’s atrocious and unlawful behaviour puts it into a legal and untenable position. 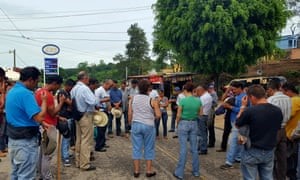 Xinca protesters in the community of Casillas, praying
for calm amid rumours the army is on its way to evict
their anti-mining roadblock. Photograph: Nina Lakhani

I recently attended a teach-in related to the mining activities by a Canadian Mining company in Guatemala. Almost all the above tactics were employed in this case.
In 2010, an indigenous Xinka lawyer in Guatemala learned that a silver mine would be coming to his people’s homeland. He alerted members of the Xinka community. Among the articles of the Indigenous and Tribal Peoples Convention was a requirement that indigenous people be consulted before minerals are extracted from the territory they occupy.
To its shareholders, Vancouver-based Tahoe Resources suggested that it had no responsibility to consult with Indigenous people. “According to our understanding, although Indigenous people may have inhabited the site at one time, there are no Indigenous populations that currently live in the immediate area of the Escobal project site,” the company wrote in a 2012.
The Escobal site is thought to be the third biggest silver deposit in the world. But it is situated in the middle of Guatemala’s southern agricultural heartlands where thousands of families live off the land.
At the present time, the Xinka, who farm the lands on which the mine is located, employ researchers to argue their opposition to the mine. Reasons for opposition to the mine are many.
One of the main objections is the mine’s effect on their water supply. The mine, when operating, consumed 255 gallons of water per minute, and 2.8 million cubic liters per year, lowering the water table and doing long-term damage to the watershed. The mine had led an entire village, La Cuchilla, to be condemned, such that the residents fit the UN definition of internally displaced persons.

“How could one logically and ethically defend, without previous consultation, a mine in the upper part of a watershed that is the source of water for several towns, in a region where arsenic exists in a natural form in the subsoil, such that it can easily enter into the water system due to mining activity that grinds the rock and exposes it to water and oxygen?

The mine is therefore a producer of anti-freedom, anti-development, and inequality, because it ignores integrated solutions and excludes the people from consideration. It offers gifts and jobs, but in exchange for risk, unbearable noise, harassment, division, negation of identity, massive transformation of the territory, and systematic exposure to harm. It aggravates inequality in several dimensions. This analysis could apply in good measure to many of the megadevelopment projects in Guatemala.”
Nicholas Copeland, October 15, 2019
https://nacla.org/news/2019/10/10/guatemala-mining-indigenous

KAIROS is supporting the Xinka. University student human rights activists from Simon Fraser University support the activists. Catholic Church activists support the Xinka. Various groups in the USA support them. That is how they are still able to hire the scientists and legal help they need to fight their case. The Xinka were even able to bring their criminal case against Tahoe Mining company to British Columbia courts, a great win for Xinka and for Canadians concerned with justice issues. Such has been the power of our Canadian mining companies that it is the first time a Canadian company has been sued in B.C. for events that occurred at operations outside of Canada.
I feel we must work hard through KAIROS to bring more regulation to Canadian mining companies operating here and abroad. If we are investors, we must be very, very careful in studying where we are placing our investments. We must also be very cognisant of the fact that we are living a good life at the expense of others at home and abroad. We cannot keep claiming that our life style is our ‘just deserts’, earned by living an honourable, sacrificial, hard-working life.

If you want to know more about our colonial activities:
https://www.theguardian.com/environment/2017/jul/13/the-canadian-company-mining-hills-of-silver-and-the-people-dying-to-stop-it

We’re Still Waiting for an Independent Ombudsperson with Investigatory Powers

Mining for the truth in Guatemala 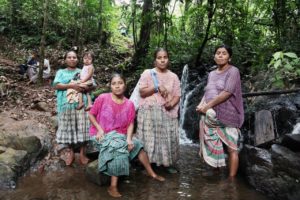 Four of 11 plaintiffs in a case brought against Hudbay Minerals, a Canadian mining firm, for crimes including gang rape in Guatemala. The women, all Indigenous Mayan, are pictured in a river near the new settlement of Lote Ocho, Guatemala, May, 2014 . Photo: Roger Lemoyne